You are here: Home / Deepen Connection / What To Do If Your Partner Is Moody 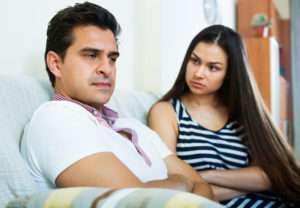 Here in NY it rained almost every day for a couple of weeks, and my client Stephanie’s husband was really moody because his outdoor plans kept getting ruined. “It’s either raining or too hot. When’s it going to be a nice day?” He’d pout around the house in a bad mood.

Stephanie’s husband was frequently moody and it was starting to get to her. It reminded Stephanie of how her father was always complaining, and she took her husband’s moods very personally. So she would give him the silent treatment when he was pouting, and they’d fall into a rut where they’d sleep in separate beds for a few nights and feel very tense.

So I asked Stephanie: What’s the story you’re telling yourself about his moodiness?

She was telling herself “He doesn’t appreciate me. He doesn’t value me. That’s why he treats me this way, and I deserve to be treated better. I’m an upbeat, positive person; why did I marry him?”

I helped Stephanie see that she had been telling herself this type of story since childhood, and this is an opportunity to heal this pattern inside of her. She had always felt powerless around her Dad, having to walk on eggshells.

Now that she’s an adult, she can stop being a victim and empower herself.

As a kid, Stephanie had needed acceptance, approval, fun and play from her Dad, and he wasn’t able to provide those things consistently. Now that she’s an adult, she doesn’t need to get those things from her husband when he’s moody; she can be resourceful and give those things to herself.

She started making time to meditate, journal, go out with her girlfriends, and have fun regardless of how her husband was acting.

She then understood that he was just reacting out of his own woundedness when he was moody. She could have compassion for him and not take it so personally. She started asking herself, “How would I treat a child who is moody?” She was even able to be lighter and playful with him, and then it didn’t bother her any more. She could go up to him and say, “Do you want a hug?” and that would de-escalate it.

Now that she wasn’t reacting to his moods any more, Stephanie’s husband would come out of his moods more quickly and they had more fun together.

So when your partner is moody, ask yourself the following questions:

Try these questions out and leave a comment below.

Could you use some help to untangle what is a happening for you in your relationship? I invite you to apply for a free Relationship Breakthrough Session. It’s my passion to support you in getting back to a place of love and connection.

60 Minutes That Will Change Your Life!
Do you want to take your relationship to the next level?
Are you ready for the life together that you dream of?
[read more]

This site uses Akismet to reduce spam. Learn how your comment data is processed.